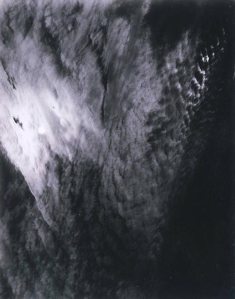 Stieglitz repeatedly used a number of motifs in his work. In New York, the symbols of modernity such as skyscrapers, snow covered streets, views of city buildings from his window, trains & railways, ferries & ocean liners, depict a changing, bustling world. In his Lake George years, Stieglitz photographed friends that visited, the farmhouse, sheds, fields, grassy knolls, clouds and dying poplar trees. Perhaps, his most famous works are the 300 or so photographs of his wife and muse, the artist Georgia O’Keeffe.

Stieglitz first photographed clouds in 1922 when he was 58 years old. It began with a simple statement from the artist, “I wanted to photograph clouds to find out what I had learned in forty years about photography.” (1)  Inspired by the work of O’Keeffe, “whose paintings were deeply expressive of her visual, emotional and psychological experiences,” (2)  Stieglitz developed his theory of clouds being the equivalent of his life experience.

Further investigation into Stieglitz’s photographs of clouds reveals a complex range of influences and readings of these fascinating images. In his early years in Europe he greatly appreciated the composers and painters of the German Romantic period. (3)  In 1912, he published an excerpt in Camera Work from Wassily Kandinsky’s book Concerning the Spiritual in Art. Kandinsky wrote of Cezanne, Matisse and Picasso: “These are the seekers of the inner spirit in outer things.” (4)  He greatly admired the transcendental writing of Ralph Waldo Emerson that elevated the spiritual above the empirical. And lastly, he was undoubtedly well-acquainted with Symbolist theories of the picture as a metaphor. (5)

His early experiments with clouds, Music – A Sequence of Ten Cloud Photographs No III, 1922 & Equivalent 1924, are both anchored to the ground by small hills and trees. But, in the Equivalents of 1929, no such connection or narrative exists. The photograph depicts the clouds on an angle which disorientates the viewer. Krauss writes that photography, “offers a direct, transparent relationship to experience.” (6)  Krauss describes the significant feature of these works is what Stieglitz chose to reject and present with only the gesture of a cut. (7)  Stieglitz relinquished control over his subject which Krauss interestingly compares to Marcel Duchamp’s readymades. 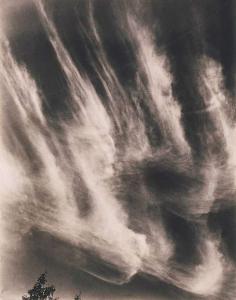 The world became a vehicle for Stieglitz to express the profound feelings he was experiencing. “There seemed to be something closely related to my deepest feeling in what I saw, and I decided to photograph what was within me.” (8)  Stieglitz wanted to transmit meaning using clouds as a metaphor. He said, “My cloud photographs are equivalents of my most profound life experiences, my basic philosophy of life.” (9) Therefore, his thoughts, emotions and experiences could correspond to abstract forms, lines and colours. Stieglitz wanted his photographs to look like photographs and to embody the medium’s inherent qualities. Sekula writes of photography’s dual nature; symbolic and realistic, art against documentary photography, “photographer as seer vs photographer as witness.” (10)  With Stieglitz’s Equivalents, Sekula believes a quintessential aspect of the medium as evidence has been renounced in favour of a metaphorical romanticism.

4 thoughts on “Alfred Stieglitz – Why I Photography Clouds.”