Susan Norrie’s installation Undertow (2002) combines six projections of varying sizes depicting provocative imagery of natural and man-made disasters which are compellingly accompanied by a haunting and mesmerising soundtrack composed by Robert Hindley. Norrie’s shift in practice to installation is interestingly characterised by Lynn who writes of “the artist’s resolution to distinguish herself within the male dominated history of art.” (1)

Norrie’s practice has developed significantly from her early years as a painter. Over the past decade Norrie’s ambitious installations incorporate painting with still imagery and video projections, sound and sculpture. This shift in the artist’s practice also coincides with a change in focusing on cramped interior spaces to vast exteriors. (2)

Norrie’s keen interest in history, especially that relating to women, the differences between appearances and reality and her Surrealist experiments with form accompany her explorations. Looking at things in different ways creates multiple perspectives enabling “parallels and resonances [to] emerge.” (3)

Norrie’s use of video alludes to cinema & its opposing elements of reality & appearances. in the darkened space of her installations the images projected are at once disturbing and uncanny for the viewer, are these scenes real or constructed? “Norrie’s depiction and implementation of the uncanny is there partly to create a specific emotional effect in the viewer but also to stimulate the viewer into thinking differently and thinking politically about the terrible problems that beset the planet in the twenty-first century.” (4) Creed suggests that even though Norrie’s vision is bleak, she still offers us the conciliation that history can be changed. (5)

The following excerpt from Rachel Kent’s essay ‘Susan Norrie: Painter of Darkness and Light’ is perhaps the artist’s incessant mantra;

We must convince each generation that they are transient passengers on this Earth. It does not belong to them. They are not free to doom generations yet unborn. They are not at liberty to erase humanity’s past nor dim its future. (6) 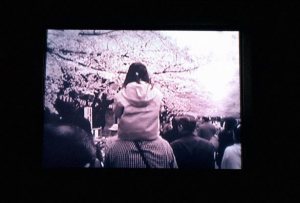 Norrie offers a sense of blind faith in Element 1. A child carried on her father’s shoulders walking through archways of cherry blossoms in Japan. Yet the blossoms bloom earlier each year due to the devastating effects of global warming. Tunnicliffe writes, “In Undertow the damage wrought by human error and the destructive power of nature echo each other, each feeding from the others potential for catastrophe.” (7)

The imbalance between the economic gains of mining natural resources & the repercussions upon nature are devastating in Element 2. A bird struggles, saturated in a sea of oil, eventually dying with a lethal injection. (8) 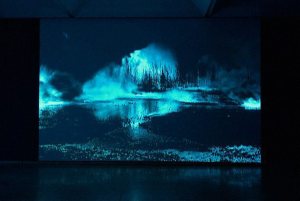 The engrossing Element 3, begins with a somewhat bucolic landscape that pans across a forest scene that begins to fill with fire and chemical fumes as trees burn in a rage. Tunnicliffe writes that Element 3 is the most painterly, drawing from the history of painting and its effects on film directors. (9) “The terrible beauty of these images is of a degraded and literally polluted sublime, of the vision of the Romantics blasted apart into a wasteland of ruined nature rather than the ruins and remnants of human endeavour in a awe-inspiring and timeless landscape.” (10)

In another sequence, haunting images of the dust storm that enshrouded Melbourne in 1983. Over two million tonnes of eroded soil, due to poor land management, was gathered up in a wind storm and choked the streets of Melbourne blocking out the sun. (11) Norrie’s footage is ominous as the dust surges turning day to darkness. 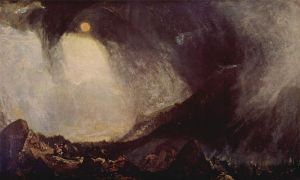 William Turner, Hannibal and His Army Crossing the Alps, 1812

Tunnicliffe suggests the tumultuous Melbourne sky is reminiscent of William Turner’s Hannibal and His Army Crossing the Alps, 1812 and the hazy forest alludes to Caspar David Friedrich’s, The Cross and the Cathedral in the Mountains, 1812. (12) But unlike these eighteenth century examples of nature & the sublime, Norrie’s work reminds us that we have neglected nature in favour of the economic gains such degradation costs. 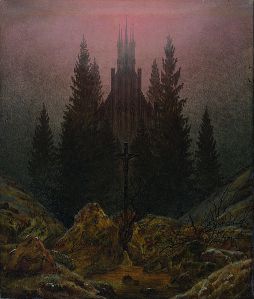 Caspar David Friedrich’s, The Cross and the Cathedral in the Mountains, 1812.

In Element 4 scientists in protective clothing release a balloon into the atmosphere to measure gases that are destroying the ozone. (13) Science has broadened our knowledge of the issues but it seems futile considering no tangible objectives will ever be implemented to create stability between economics and environmental protection. 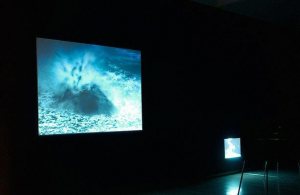 The scale of Element 5 is intimately smaller. The bubbling mud pools of Rotorua, New Zealand are at once therapeutic in nature & ominous considering such geothermal activity occurs near the Earth’s fault lines. The thick, oozing mud & sulphurous vapour that emanates sits heavy in the air and the geysers that erupt from the earth’s core create an other worldliness.

Kent writes, “The image of uncontrolled nature refers back to humanity- this time impelled by the desire to harness and exploit nature’s resources, yet powerless against its raw force. As the artist observes: ‘I have always been fascinated by the contradictory forces of nature, its illusive beauty and potential violence.” (14)

The development of Norrie’s practice is apparent in the final element in Undertow. Norrie cites Orson Welles’ adaptation of Kafka’s, The Trial, 1962 as an example of the hopeless efforts individuals face when dealing with bureaucracy. (15) 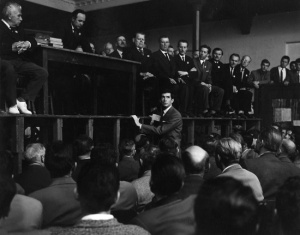 Film Still from ‘The Trial.’

Film trailer for ‘The Trail.’

In Undertow, video projections & sound represent a world that oscillates between beauty & exploitation. Disturbing natural & unnatural events overwhelm the viewer. Images of cherry blossom blooming early due to global warming, festering & erupting mud pools, billowing dust storms and scientists conduct experiments that seem futile in the face of such events. Within a darkened exhibition space, lit only by the six screens, Norrie slows the footage down. This, and Hindley’s accompanying soundtrack creates a strangely meditative, dreamy atmosphere.