The Magic Image describes Eadweard Muybridge as an, “Inventor, traveller, photographer, murderer…” he shot and killed his wife’s lover. (1) 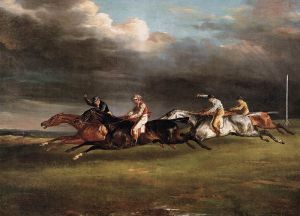 A former governor of California, Leland Stanford, commissioned Muybridge to settle the dispute over whether a trotting horse, ever had all four of its feet off the ground. The artist at the time believed it was an impossible task. (2) With the support of the University of Pennsylvania in Philadelphia, Muybridge produced over 100,000 images of humans and animals in motion. Muybridge arranged twelve cameras beside the track, “Strings attached to electric switches were stretched across the track; the horse, rushing past, breasted the strings and broke them, one after the other; the shutters were released by an electromagnetic control, and a series of negatives made.” (3) 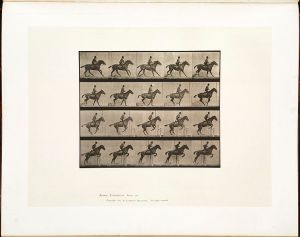 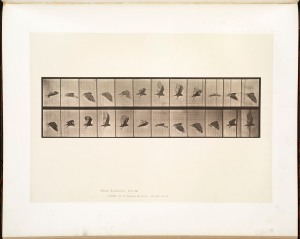 The results were astounding and proved that a galloping horse did at some point have all four feet off the ground. But not in the way that Jean Louis Théodore Géricault’s, The Epsom Derby had depicted. Muybridge had captured what the eye alone could not distinguish. The compilations of his studies greatly influenced artists and the advancement of industrial and scientific photography.

His inventiveness “nearly led to the invention, not just of the ‘movies’, but of the ‘talking picture’ itself. (4) The pictures in strips could be viewed in a zoetrope, which twirled the images, merging them so quickly that it produced the illusion of motion. In 1880 he projected his pictures onto a screen at the California School of Fine Arts, using a device he invented called a zoogyroscope. 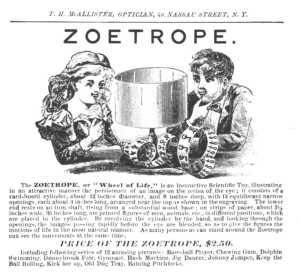