Pictorialism was an international style and aesthetic movement that legitimized photography as a fine art in the late C19th. (1) The rapid increase in travel and commerce easily transported books and publications around the globe. This facilitated the exchange of aesthetic ideas, artistic techniques and most notably actual photographic prints. (2)

For the first 40 years of photography only those dedicated to science, mechanics and art practiced it. In 1888 things dramatically changed when Kodak introduced the first hand held box camera. Kodak’s slogan, “You press the button, we do the rest.” (3)

The Kodak camera was preloaded with film that produced about 100 pictures. When the whole roll of film was exposed, the camera was returned to Kodak in Rochester, New York. The film was developed and prints were made. The prints and the camera with a new roll of film inside where returned to the customer. Now anyone could take a photograph. “No knowledge of photography is necessary,” read the Kodak advertisement. (4)

Photography collector Michael Wilson observed, “Thousands of commercial photographers and a hundred times as many amateurs were producing millions of photographs annually… The decline in the quality of professional work and the deluge of snapshots (a term borrowed from hunting, meaning to get off a quick shot without taking the time to aim) resulted in a world awash with technically good but aesthetically indifferent photographs.” (5) Naturally with the advent of the Kodak camera, debates about photography as an art form or a mechanical medium ensued.

The Pictorialists denounced the point-and-shoot Kodak approach to photography and emphasized the role of the photographer as an artist or craftsman. They preferred “labor-intensive processes such as gum bichromate printing, which involved hand-coating artist papers with homemade emulsions and pigments, or they made platinum prints, which yielded rich, tonally subtle images.” (6)

In terms of style, Pictorialists would manipulate or “create” a photograph rather than just recording a scene. Pictorialists veered away from documentation of everyday life and composed images imbued with a sense of drama and fantasy. Generally, a Pictorialist photograph lacks sharp focus and due to the hand coated papers, brush strokes appear on the surface creating a painterly quality to the image. 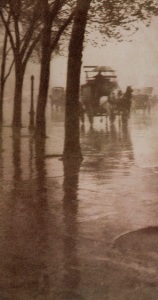 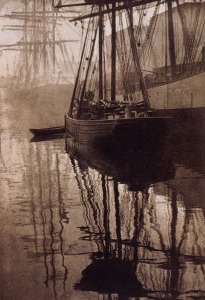 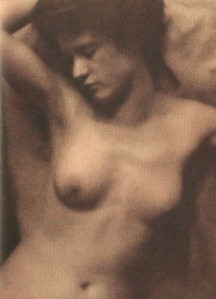